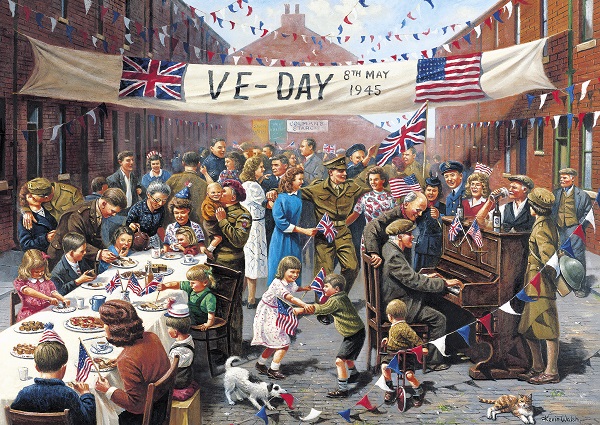 This 500 piece puzzle depicts a community celebrating on Monday 7th May 1945, following six years of war.
The nation and indeed the whole world erupted into scenes of jubilation following the unconditional surrender by Germany’s General Jodl.
The war in Europe was over. Within minutes of the announcement, many thousands of people gathered on the streets of Great Britain to celebrate the event.
Bonfires were lit, street parties took place, and in London over 50,000 people filled the streets between Trafalgar Square and Big Ben as three Lancaster bombers flew overhead, dropping red and green flares.
The Royal Family together with Winston Churchill came out onto the balcony at Buckingham Palace to be greeted and cheered by the waiting crowds.
That evening, two searchlights made a giant V above St Paul’s Cathedral as the celebrations continued well into the night.
The following day May 8th was declared VE Day and a national holiday, to officially celebrate Victory in Europe.
Because the box is slightly smaller than our previous designs, we have included an artwork poster inside for you to reference.

There are no reviews yet.

Only logged in customers who have purchased this product may leave a review.