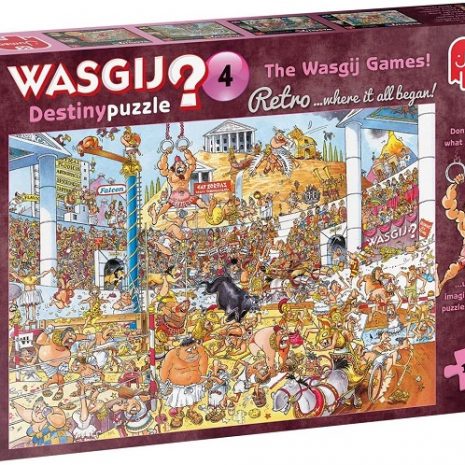 To celebrate the hugely popular Wasgij jigsaw puzzle brand, the fourth Wasgij Destiny puzzle ever produced has been re-released in a special edition Retro range.

This WASGIJ GAMES scene finds the Colosseum sold out: fans from across the globe have gathered to witness sporting history in the making as athletes compete to win gold in the Wasgij Games.
But how different would the Wasgij Games look today? Will there still be the blood, sweat and tears these games were renowned for, or will the modern era be easier on the eye?
Wasgij Destiny is the puzzle concept where you must use your imagination and clues provided to piece together not what you see, but what the scene printed on the box will look like in the future.

So why is Wasgij so popular? With traditional jigsaws, you build the exact image that’s shown on the box. With Wasgij, you have to build an image that’s different from that shown on the box. Although we give a few clues, Wasgij challenges you to use your imagination. Put that together with great drawings and pictorial humour, and it is no surprise that Wasgij has topped the jigsaw puzzle charts for so many years.
Enjoy and see where Wasgij began!

There are no reviews yet.

Only logged in customers who have purchased this product may leave a review.